Lipid droplets (LDs) are composed of neutral lipids such as triacylglycerol & cholesteryl ester that are surrounded by phospholipid monolayers and are seen ubiquitously, not only in adipocytes1). LDs were originally thought to serve as a lipid storage unit, until a recent study showing that LDs play an important role in regulating lipid metabolism, autophagy2) and cellular senescence3). Therefore, LDs have gained great attention as an important tool to elucidate the mechanisms of their formation, growth, fusion, and retraction. 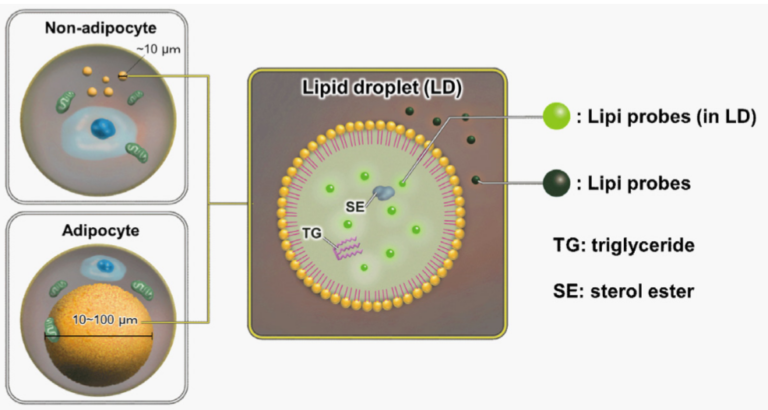 For more information on Lipi-series and examples, please refer to the publication below: 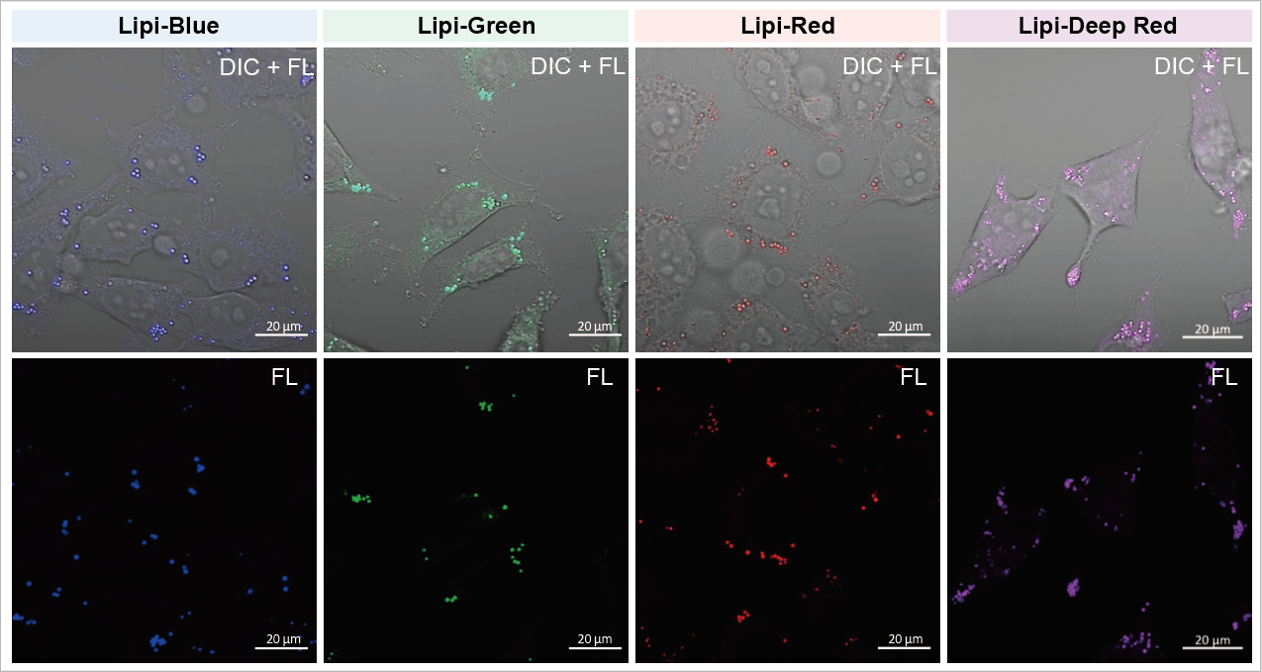 Live HepG2 cells were stained with each of the Lipi products, Nile Red, and Reagent B.

Lipi-Blue and Lipi-Green had higher retention in cells after 24 hours post staining than Lipi-Red, Nile Red, and Reagent B.

After fixing HepG2 with 4% PFA, cells are stained with 100 nmol/l Lipi-Blue. Then, Adipophilin (ADFP) expressed on lipid-droplet membrane was labeled with anti-ADFP antibody

Live HeLa cells were treated with Oleic acid and were stained with 100 nmol/l Lipi-Blue and 100 nmol/l Nile Red. Nile red had high background due to the limit in selectivity toward lipid droplets. 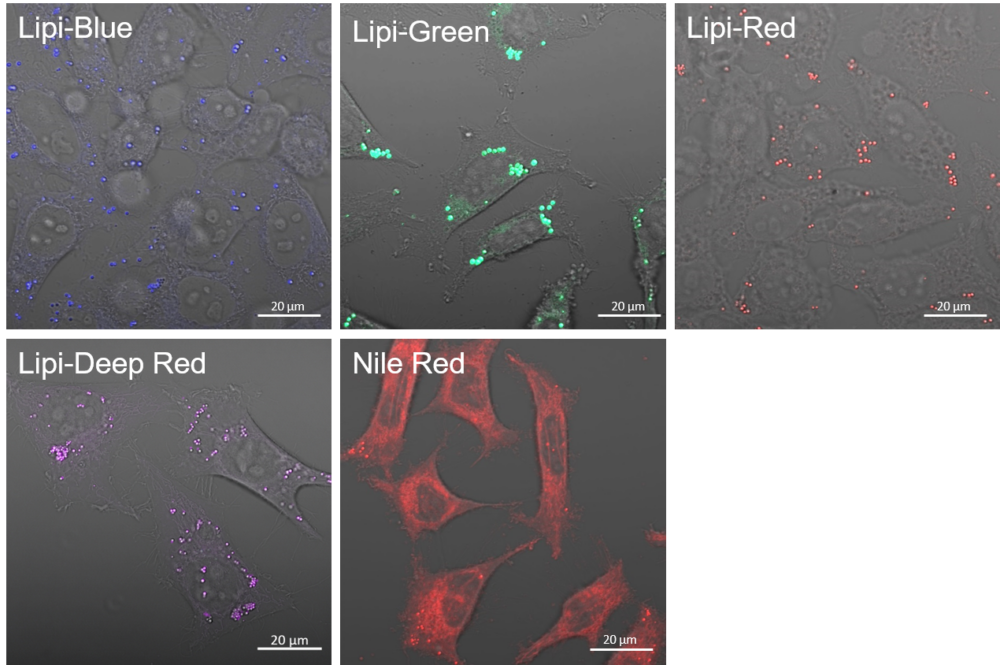 After adding Lipi-Deep Red (0.1 μmol/l) to the Arf4-GFP expressed Hela cells and the cells were incubated for 30 minutes, the cells were treated with 4% PFA (PBS) to fix, and washed with PBS three times. Fluorescent imaging was conducted by confocal microscopy.

Lipid droplets in adipocyte were clearly detected by staining adipocytes, derived from 3T3-L1 preadipocytes, with Lipi-Series.

1. HeLa cells were seeded on a μ-slide 8-well plate and cultured at 37 ℃ overnight in a 5% CO2 incubator.
2. A conventional method was used to induce adipocyte differentiation.
3. The supernatant was removed and the cells were washed twice with DMEM (25 mmol/l glucose, 10% FBS, phenol red free).
5. The Lipi-series working solution (in DMEM (25 mmol/l glucose, 10% FBS, phenol red free)) was added and the cells were incubated at 37 ℃ for 24 hours in a 5% CO2 incubator.
6. The cells were observed using a fluorescence microscope.

After adding Lipi series to the 4% PFA (PBS) fixed mouse liver adipose tissue and the tissue were incubated for overnight, and washed with PBS. Fluorescent imaging was observed by fluorescence microscopy.

Changes in lipid droplets were examined after the addition of oleic acid or Triacsin C (acyl-CoA synthetase inhibitor) to the HepG2 cell culture medium. For analysis, the number and total area of lipid droplets per cell were computed from the images acquired with CQ1, a confocal quantitative image cytometer (Yokogawa Electric Corporation).

Experimental conditions
HepG2 cells (1 x 103 cells) were disseminated on a 96-well plate and incubated overnight. After the culture supernatant was removed, the cells treated with DMEM plus FBS only (control), DMEM plus FBS and 200 μmol/L oleic acid (Oleic acid), and DMEM plus FBS and 5 μmol/L Triacsin C (Triacsin C) were incubated overnight. Cells were then washed twice with PBS buffer, fixed with 4% PFA for 5 minutes at room temperature, and washed twice with PBS buffer again. Finally, cells were stained in the dark for 2 hours at room temperature with 0.5 μmol/L Lipi-Blue working solution, and quantitative analysis was performed through CQ1.

What should I do if the fluorescence is not detected?

1. Filter conditions
Check the fluorescence spectrum of the dye on the product HP and confirm if the excitation / emission wavelength for your filter is suitable.
2. Concentration of Lipi probe working solution
Optimize the concentration within the following range:
Lipi-Blue, Lipi-Green: 0.1-0.5 μmol / L
Lipi-Red: 1-5 μmol / L
* If fluorescence is not detected even under the above conditions, prepare a higher concentration of the working solution.
Lipi-Blue & Lipi-Green: 1-2 μmol / L
Lipi-Red: 10 – 20 μmol / L

5. Other
Depending on the cell type, lipid droplets can be smaller than usual and it may be too difficult to observe.
If that is the case, please observe under a high magnification microscope or prepare for positive control with oleic acid treated cells.

Can I use Lipi-dye for fixed cells?

Yes, Lipi-dye can be used for fixed cells.

* Please use paraformaldehyde (PFA) for fixation. Alcohol fixation is not recommended because it may affect the structure of lipid droplets.

Can I use Lipi-dye for frozen tissue?

Yes, Lipi-dye can be used for frozen tissue.

* Please use paraformaldehyde (PFA) for fixation. Alcohol fixation is not recommended because it may affect the structure of lipid droplets.

Are there any information about filter used in co-staining?

Yes, please refer to the table below and choose the filter. 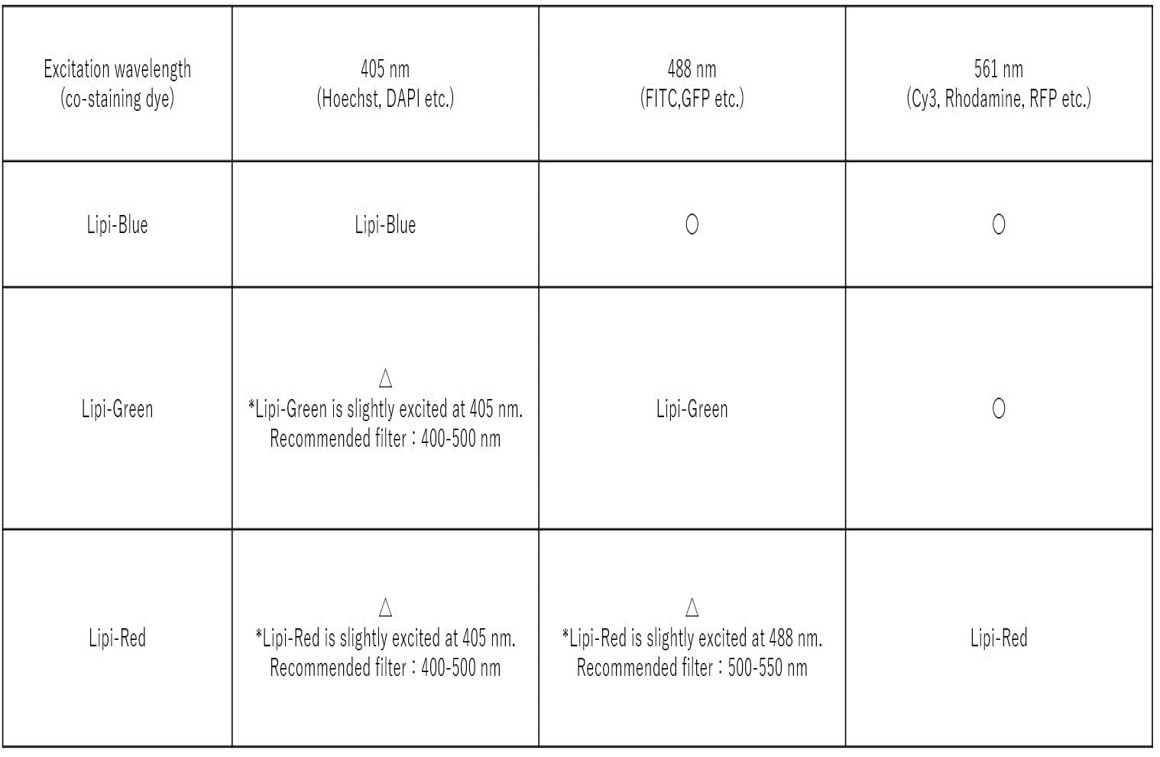