Dojindo Laboratories have developed and improved detection methods to evaluate the nutritional uptake capacity of cells. Here, we present useful advice from advanced researchers who have used our products.

・All data are listed in the following table: Click the link in the table to view the data in detail

Cells absorb a variety of nutrients (glucose, fatty acids, and amino acids, amongst others) and contribute to the production of proteins, lipids, nucleic acids, and energy necessary for cell proliferation and survival, as well as the maintenance of intracellular redox through intracellular metabolism. These nutrient metabolism processes vary depending on the extracellular environment, the state of the cell, and the cell type. Recently, it has become clear that nutrient metabolism is involved in the regulation of various cellular functions, including gene expression, and has thus attracted much attention.

Glucose is one of the most important nutrients and is taken up into cells mainly via glucose transporters (GLUTs ). Intracellular glucose is a major source of ATP, nucleic acids, and lipids. After glucose is taken into the cell, it is metabolized by various enzymes and is converted to pyruvate via the glycolytic pathway. Then pyruvate participates in the citric acid circuit (TCA cycle ) via acetyl-CoA in the mitochondria and is used to produce NADH and FADH, which are necessary for ATP production. Although ATP can be synthesized by both the glycolysis pathway and the OXPHOS pathway, OXPHOS using NADH and FADH in mitochondria is the most efficient and major ATP production pathway. 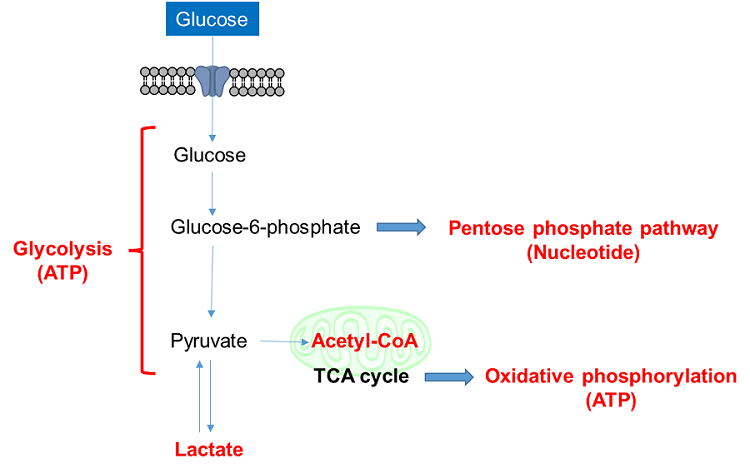 Radiolabeled glucose is the most common method of evaluating the glucose uptake capacity of cells. However, because of the radioactive compound, it is complicated to perform and lacks versatility. An enzymatic cycling method using 2-deoxy-D-glucose (2-DG ) can be used for colorimetric or fluorescent plate assays, but it is not applicable for cell imaging or flow cytometry. The fluorescent glucose tracer 2-NBDG  has recently been more widely used, but its low fluorescence intensity is widely criticized.

Thus, Dojindo Laboratories have developed a new fluorescent-labeled glucose derivative, Glucose Uptake Probe (Blue, Green, Red), to replace 2-NBDG. The Glucose Uptake Probe is much brighter than 2-NBDG and can measure the glucose uptake capacity of cells with high sensitivity. In addition, there are three different colors to meet different needs, enabling its use in various applications.

Inhibition of glucose uptake by compounds that inhibit the glycolytic pathway

T cells play a central role in the immune system to eliminate cancer cells. In recent years, it has become clear that metabolism is also involved in the regulation of T cell functions such as differentiation and activation, and research on metabolism in cancer immunity has become more popular. Cancer cells absorb large amounts of nutrients to maintain their proliferative activity, while activated T cells also require large amounts of nutrition, especially glucose, to eliminate cancer cells. Therefore, activated T cells and cancer cells compete for glucose uptake.

Cancer cells express PD-L1 to suppress T cell activity in response to PD-1 on the surface of activated T cells, an immune checkpoint molecule, and recent studies have shown that this interaction suppresses T cell glucose uptake. Cancer cells also regulate the metabolism of immune cells to evade the immune system in this way, and it is important to understand the metabolism of immune cells as well as cancer cells in the field of cancer immunology. 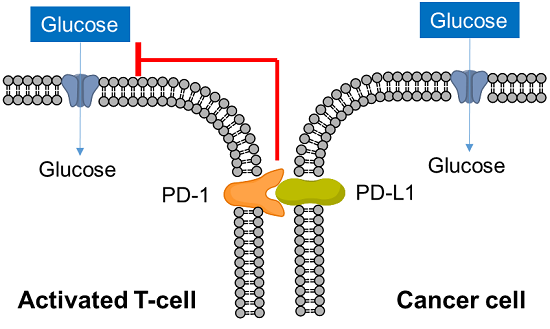 Decreased glucose uptake due to deficiency of the glycolytic enzyme Pgam1

Diabetes is a disease in which glucose in the blood is not taken up into the cells, resulting in increased blood glucose levels. In muscle cells and adipocytes, insulin stimulation causes GLUT4, a glucose transporter, to migrate to the surface of the cell membrane and promote glucose uptake. This insulin-responsive glucose uptake is closely related to diabetes and is an important target in the clarification of diabetes and the development of therapies. 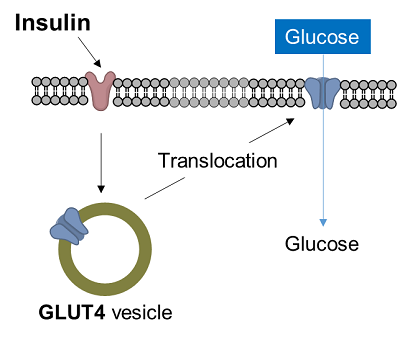 Enhancement of glucose uptake during differentiation into adipocytes

The glucose uptake capacity of mouse progenitor adipocytes increased as long as differentiation into adipocytes was observed. 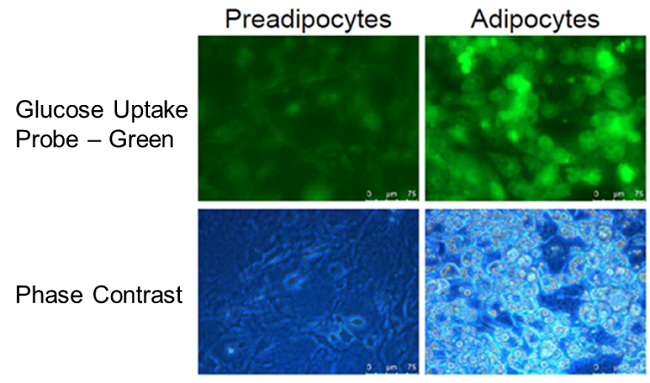 Enhancement of glucose uptake in adipocytes after insulin treatment

Amino acids are essential for intracellular energy production and the synthesis of proteins, lipids, and nucleic acids, and are taken up into cells mainly via transporters. Cancer cells take up large amounts of amino acids as well as saccharides and fatty acids to maintain cell proliferation and enhanced intracellular metabolism, and amino acid transporters are attracting attention as targets for cancer diagnosis and drug discovery. For example, L-type amino acid transporter 1 (LAT1) is expressed in many cancer cells and is known to take up essential amino acids including branched-chain amino acids (BCAA). In recent years, BCAAs in particular have attracted attention as essential nutrients involved in major protein synthesis and energy production in cancer cells. 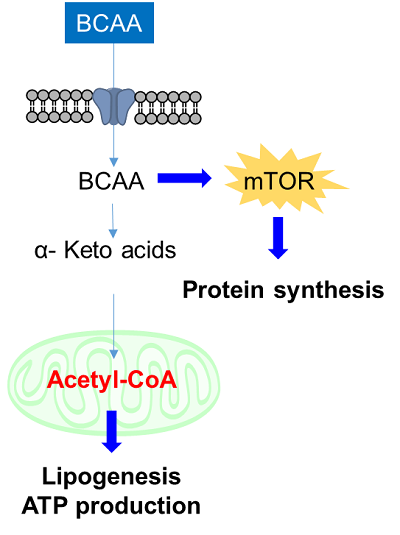 The intracellular uptake of BPA was inhibited by the addition of BCH, a LAT inhibitor, and L-leucine, a BCAA. 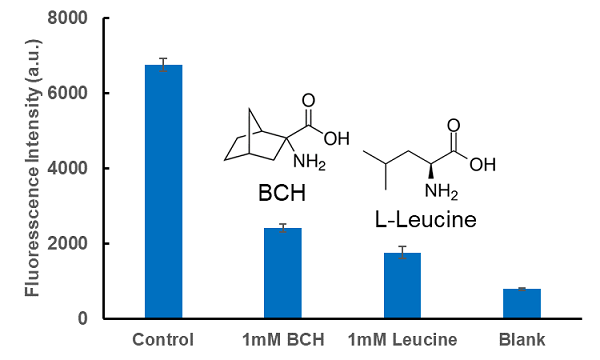 The intracellular uptake of BPA was inhibited by the addition of BCH, a LAT inhibitor, and L-Leucine, one of the BCAAs.

The addition of ovalbumin peptide inhibited the uptake of amino acids into C2C12 cells. 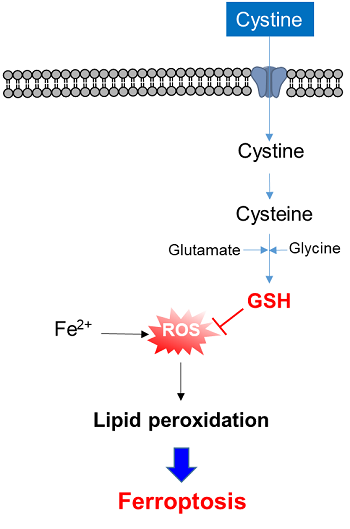 In xCT knockdown cells, almost no cystine uptake was observed. 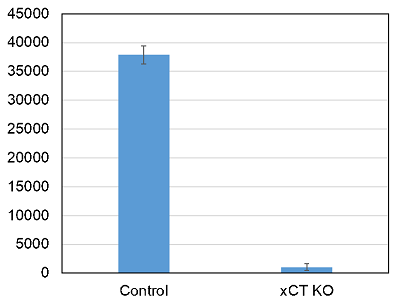 Inhibition of cystine uptake by sulfasalazine

Cystine uptake was inhibited by the addition of an xCT inhibitor, sulfasalazine (SSZ).

The addition of diethyl maleate(DEM) enhanced cystine uptake by HepG2 cells. The effects of DEM treatment may be because KEAP1 induced xCT expression through the KEAP1–NRF2 pathway. 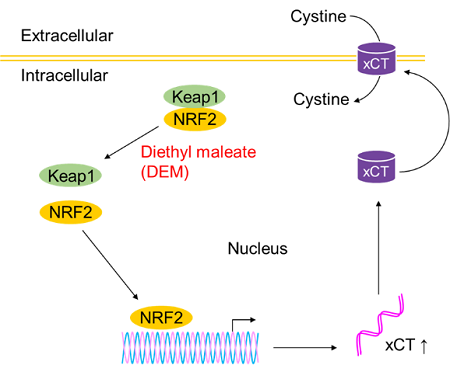 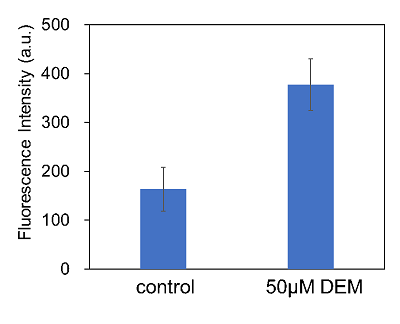 Analysis of changes in nutrition uptake by xCT inhibitor Erastin 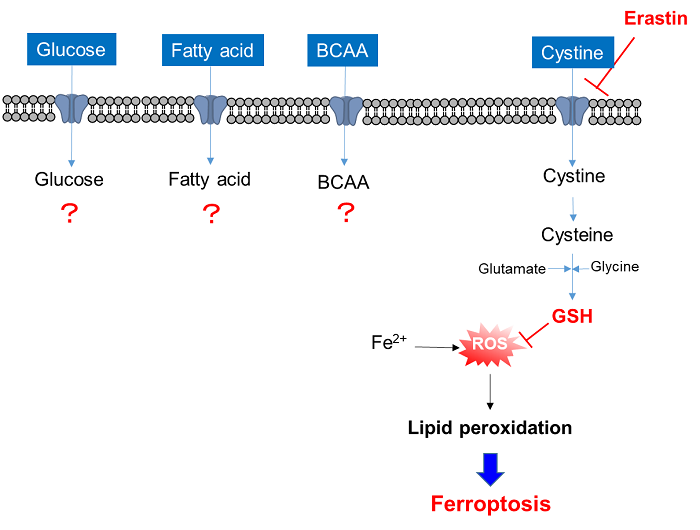 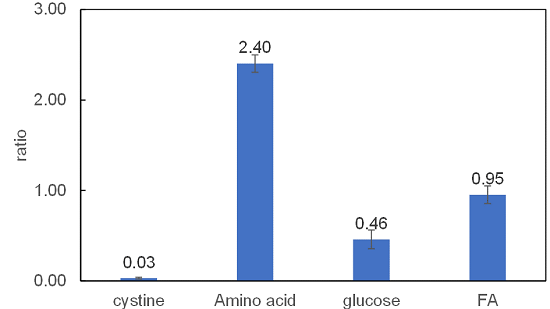