Amyloidosis, a disease which has been identified as a particular disorder by the Japanese Ministry of Health, is an illness that involves an abnormal protein called amyloid that has a β sheet structure, aggregates in fibers, and is deposited on the outside of internal organs and systems, inhibiting the function of those organs and systems. Disorders among many Japanese include immunocytic amyloidosis (AL amylodosis), responsive AA amyloidsis, familial amyloid polyneuropathy (FAP), and dialysis amyloidsis (DRA). It is estimated that there are hundreds of patients throughout Japan. The proteins that cause amyloidosis can be largely divided into two groups: amylids that are deposited in various organs throughout the body (systemic amyloidosis) such as the disorders listed above, and [ amyloids that are deposited in a particular organ, such as the brain in the case of Alzheimer’s disease (localized amyloidosis). The dye 1-Bromo-2,5-bis(3-carboxy-4-hydroxystyryl)benzene (BSB) has been used for detecting amyloids because of its high affinity with amyloid β peptide (Aβ), the amyloid associated with Alzheimer’s disease.
Skovronsky confirmed that the dye accumulates in senile plaque of brain tissue of transgenic mice Tg2576 that express the amyloid precursor protein of Aβ(APP) 18 hours after the intravenous injection of BSB.1) Not limited to Aβ, Ando and others have announced that amyloid deposits in various systemic amyloidosis (AA, AL, ATTR, Ascr, Aβ 2M) are stained more sensitively with BSB than Congo red, which is a common dye used for β sheet staining. BSB has twice the fluoresence strength of Congo red. In addition, BSB is not only a staining dye, it is also able to block the amyloid formation FAP’s amyloid precursor TTR. Newly developed FSB is also utilized for highly sensitive amyloid staining. This is made possible by the bromine in BSB changing to fluorine and being recovered from the fluorescence quenching caused by the heavy electron effect of bromine. From the results of the stains of Alzheimer patients Ebrain tissue (Fig. 1) and the heart tissue of AL amyloidosis patients (Fig 2), it appears that FSB detects amyloid deposits better than BSB.

1. Add 50% EtOH to the product and dilute to concentration of 0.01~0.0001% FSB solution.
2. Soak a slice in FSB stain for 30 minutes. After soaking the slice in saturated lithium carbonate, wash with 50% EtOH
3. Detect stained area under UV light (V excitation) 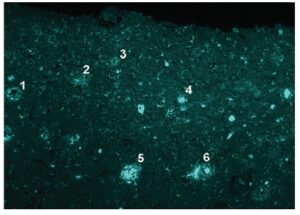 Fig. 1 Tissue staining with FSB
A stained image of a segment of the frontal cortex of a patient with Alzheimer’s disease. The tissue was fixed with ethanol. The illuminated portions are amyloids. The numbers in the subadjacent slice figures correspond to each senile plaque. (Image was courteously provided by Dr. Higuchi, Dr. Saido, Laboratory for Proteolytic Neuroscience, RIKEN Brain Science Institute.)

Fig. 2 Tissue staining with FSB, BSA, and Congo red
A slice of heart tissue of a patient with AL amyloidosis (Congo red is auburn colored, the illuminated portions of BSB and FSB are amyloids). These are sub-adjacent slices. It is possible to examine finer portions by FSB, and the contrast with the amyloid deposit portions are clear. (Image was courteously provided by Dr. Andoh: Department of Laboratory Medicine, Kumamoto University School of Medicine.)