Order
Quantity may be adjusted within the cart.
C of A
SDS download

Cells have intracellular organelles that function to produce energy, synthesize and degrade proteins. Typical organelles include the nucleus, mitochondria, endoplasmic reticulum, and lysosomes. Although research on the functions of these organelles has been actively conducted for some time, recent developments in imaging technology, such as super-resolution imaging, have revealed that not only the functions of each organelle but also the coordination among organelles is important. One such example is the mitochondria-associated endoplasmic reticulum membrane, which is the interface between mitochondria and the endoplasmic reticulum (ER). Visualization of mitochondria is necessary to observe the interaction between mitochondria and other organelles. Fluorescent protein labeling, immunostaining, and mitochondria-selective small molecule fluorochromes are commonly used for this purpose, although these methods have problems. The fluorescent protein labeling method requires gene transfer, and multiple staining may not be able to perform in the immunostain method depending on the animal species of the primary antibody. In addition, commercially available mitochondria-selective small molecule fluorescent dyes do not have good retention properties and are difficult to use in immunostaining.
To overcome the problems above, Dojindo has developed a new mitochondria-selective small-molecule fluorescent dye, MitoBright IM Red, which covalently binds to proteins and other biomolecules. MitoBright IM Red, therefore, is able to simultaneously perform the staining mitochondria and the immunostaining.

Using MitoBright IM stained HeLa cells' mitochondria and then after fixation and membrane permeanbility treatment, co-stained with immunostaining using KDEL antibody, a marker protein of the endoplasmic reticulum(ER). The fluorescence intensity was measured in the area indicated by the blue arrow in the fluorescence image (right). As a result, the morphology of the mitochondria and the neighboring endoplasmic reticulum was clearly observed.

Common molecular probe for mitochondrial staining has a problem with retention to mitochondria when co-stained with immunostaining methods. MitoBright IM has a structure with improved retention properties compared to existing small molecule dyes, which reduces the loss of fluorescence intensity and localization during immunostaining.

Using MitoBright IM and company T's existing reagent stain live cells followed by fixation and membrane permeability treatment. The below image shows the fluorescent intensity difference after each step. Although the fluorescence intensity of both reagents decreased after fixation and membrane permeability treatment compared to live cells. However, it was confirmed that MitoBright IM has higher retention and clarity than the existing reagent. 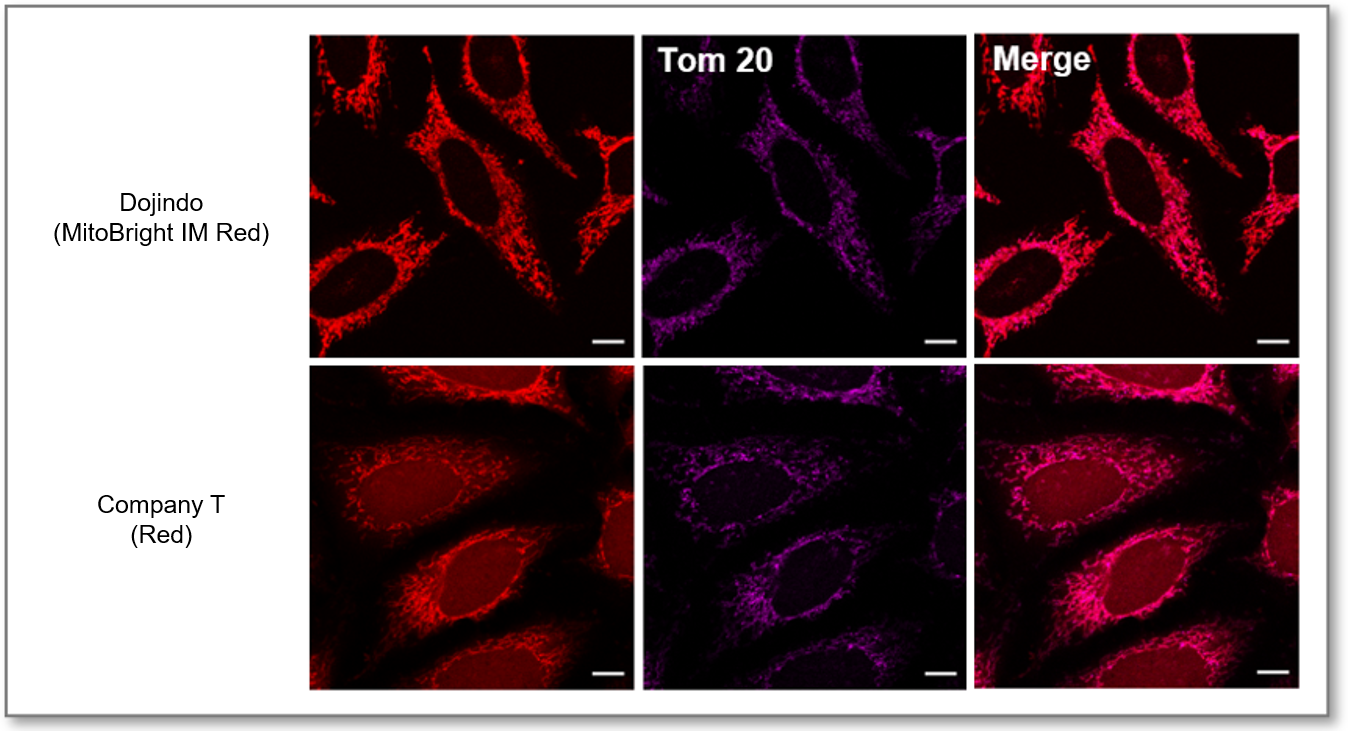 We have confirmed that 5 times of frozen and thawing the MitoBright IM Red DMSO solution is still stable. However, we recommend dividing the solution for long-term storage.

When cells were stained with MitoBright IM after drug treatment, the staining was uneven. What can I do to improve it?