Order
Quantity may be adjusted within the cart.
Component

The kit is used for the determination of ACE inhibition activity. ACE works in the Renin-Angiotensin system, which is one of the mechanisms of blood pressure control, to convert Angiotensin I to the vasopressor Angiotensin II. This enzyme also contributes to elevated blood pressure due to its role in breaking down the antihypertensive peptide Bradykinin. In recent years, food and supplements containing ingredients that block ACE have received attention for their use in preventing high blood pressure. The conventional method of measuring ACE inhibition employs the synthetic substrate Hippuryl-His-Leu. Hippuric acid from the synthetic substrate is extracted with ethyl acetate, condensed, redissolved, and then read at an absorbance of 228 nm. This method is cumbersome and measurement is subjected to error due to residual ethyl acetate. ACE inhibition Assay Kit enzymatically detects 3-Hydroxybutyric acid (3HB), which is made from 3-Hydryoxybutyryl-Gly-Gly-Gly (3HB-GGG). Using a 96-well format, it is possible to test multiple samples at one time. In addition, there is no need to use harmful organic solvents, resulting in a safe, simple, and highly reproducible assay.

Fig. 1 Principle of the assay system to determine ACE activity or inhibition activity.

Comparison to the Conventional Method by Ethyl Acetate 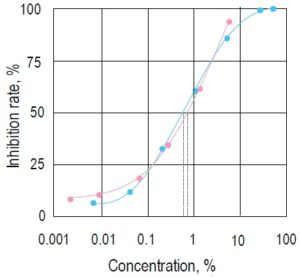 Fig. 3 Inhibition curves prepared by two beverages containing a valyltyrosine (pink●) or lacto tripeptide (blue●) .
IC50 of these beverages are 0.56% and 0.69%, respectively. It is known that these substances have antihypertensive effects. *Concentration of the beverage in the sample solution.

Checking the Presence of ACE Inhibition

For 50 tests unit size, 14 samples can be tested in triplicate 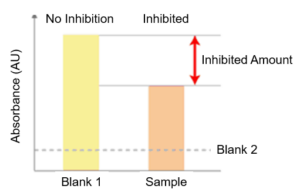 For 50 tests unit size, 2 samples can be tested in triplicate 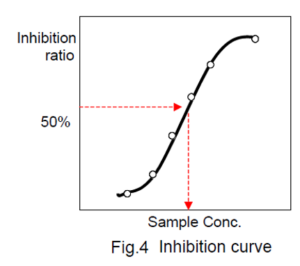 ACE Kit-WST is expected to be an advantageous tool to support the discovery of ACE inhibitors effective at suppressing inflammation after SARS-CoV-2 infection.

Angiotensin-converting enzyme (ACE) produces angiotensin II (Ang II), a vasoconstrictor, from the C-terminus of angiotensin I (Ang I), which has almost no biological activity. ACE and Ang II activity is countered by ACE2, which functions to cleave inflammatory Ang II into non-inflammatory peptide Ang 1-7.

During SARS-CoV-2 infection, angiotensin-converting enzyme 2 (ACE2) from the cell membrane is taken up into cells along with the virus, decreasing ACE2 activity on the cell membrane. As a result, angiotensin II (Ang II), which had been counteracted by ACE2, becomes uninhibited, beginning a cascade towards an inflammatory cytokine storm that has been suggested to promote lung damage.

Thus, Ang-II mediated cytokine storm is considered to be an important mechanism of severe COVID-19. Therefore, ACE inhibitors, which suppress the Ang II system, are currently expected to reduce the risk of severe Covid-19 symptoms brought on by inflammation, such as acute respiratory distress. 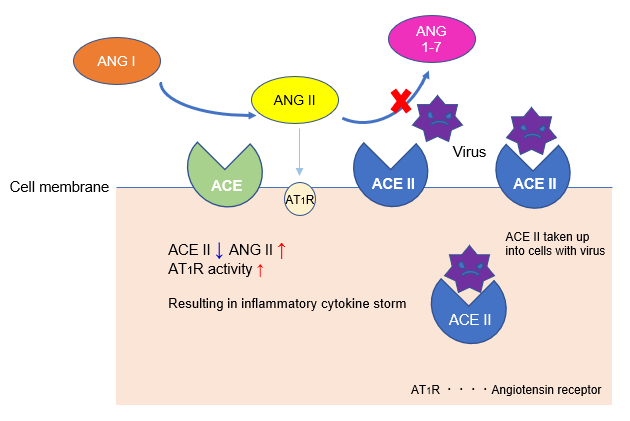 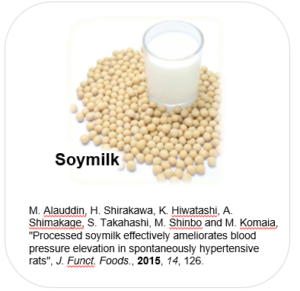 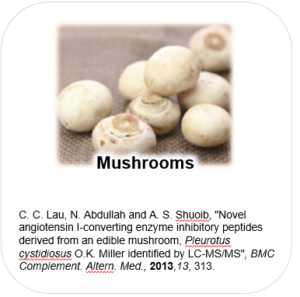 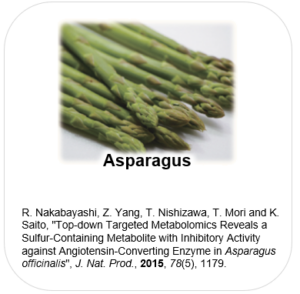