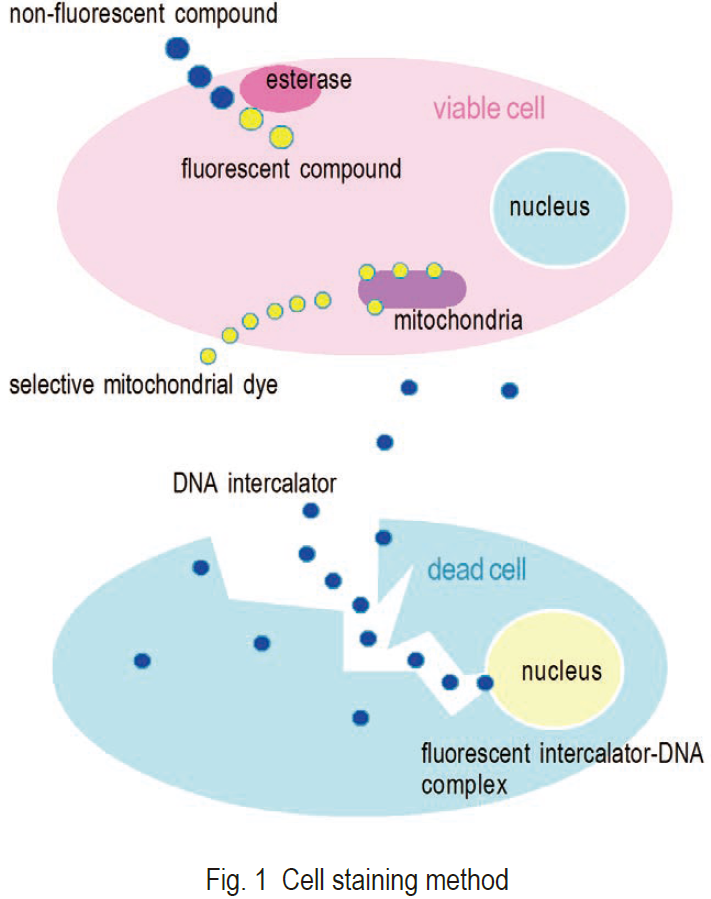 Fluorogenic esterase substrates that can be passively loaded into viable cells, such as Calcein-AM, BCECFAM, Carboxyfluorescein succinimidyl ester (CFSE), and Fluorescein diacetate (FDA), are converted by intracellular esterases into fluorescein analogs with green fluorescence. Calcein and BCECF can be converted into electrically neutral molecules by the addition of acetyl or acetoxymethyl groups to their phenolic OH or carboxylic groups, which allows them to freely permeate into the cell. Once converted into fluorescent products by esterase, these compounds are retained by cells because of their negative charges. These esterase substrates, therefore, can serve as assay probes of cell viability. Fluorescent esterase substrates may also be used in cell viability assays in place of tetrazolium analogs such as MTT or WST. The mechanism for determining cell viability is different: Although both assays determine cell metabolism, esterase substrates detect esterase activity; tetrazolium salts detect dehydrogenase activity of viable cells. CFSE is also an ester compound that passes through viable cell membranes. Since it has an amine-reactive succinimidyl group, fluorescein derived from CFSE can covalently bond to proteins or other amino groups in the cell or on the cell membrane. This covalently attached fluorescein remains stable and allows the cell to be traced over several weeks.

Mitochondria exist in most eukaryotic cells and play a very important role in oxidative metabolism by generating ATP as an energy source. The average number of mitochondria per cell is from 100 to 2,000. Although the typical size is about 0.5-2 mm, the shape, abundance, and location of mitochondria vary by cell type, cell cycle, and cell viability.Therefore, visualization of mitochondra is important. Since mitochondria have electron transport systems, they can be stained with various redox dyes. MitoRed and Rh123 readily pass through cell membranes and accumulate in mitochondria. The fluorescence intensity of Rh123 reflects the amount of ATP generated in mitochondria.

Fluorescent dyes with aromatic amino or guanidine groups, such as propidium iodide (PI), diaminophenylindole (DAPI), acridine orange (AO), and Hoechst dyes, interact with nucleotides to emit fluorescence. PI molecules intercalate inside the DNA double helix. DAPI and Hoechst dye molecules attach at the minor groove of the DNA double helix. On the other hand, AO can form complexes with either double-stranded DNA or single-stranded DNA and RNA. One molecule of AO can intercalate with three base pairs of double-stranded DNA to emit green fluorescence with the maximum wavelength at 526 nm. One molecule of AO can also interact with one phosphate group of single-stranded DNA or RNA to form an aggregated, or stacked, structure that emits red fluorescence with the maximum wavelength at 650 nm. Cell membranes of viable cells are impermeable to these fluorescent dyes,except for the Hoechst dyes, and these dyes can therefore be used as fluorescent indicators of dead cells. Hoechst dyes are positively charged under physiological conditions and can pass through viable cell membranes.