Signal transduction is one of the most important functions carried out by living cells. Information outside of a cell is usually transmitted into the cell in the form of various chemical stimulations. A living cell has many different receptors on its surface by the activation of which information is transferred to the intracellular spaces. The signal then changes to another form to process the information and cause a suitable cellular response. Second messengers play an important role in transferring information to the inside of the cell. Change in ion concentration is a major step that helps second messengers relay information. Monitoring and control of the intracellular ion concentration is extremely important in understanding second messengers and intracellular signal transduction. Dojindo offers a wide selection of fluorescent intracellular ion probes for calcium, proton, zinc, and chloride ions.

Calcium is one of the most important messengers in living cells. It carries messages that help in muscle contraction, nerve cell signal transmission, hormone secretion, immune cell activation, and other cellular functions. Dr. Tsien first developed fluorescent probes for calcium monitoring in viable cells. Calcium indicators selectively bind to calcium ions. Their fluorescent signal intensities or wavelengths change because each intracellular calcium probe has a calcium-selective chelator and a fluorescent moiety in its molecule. EGTA is a good chelator with selectivity for calcium ions 105 times higher than for magnesium ions. However, an EGTA molecule has two highly basic aliphatic amines that are protonated at neutral pH. This means that a deprotonation step is involved in the calcium binding process, which causes a change in the fluorescent signal. To avoid pH dependence of the fluorescent signal in calcium detection, Dr. Tsien changed the aliphatic amines of EGTA to aromatic amines, thereby transforming EGTA into a new calcium chelator, BAPTA. In designing calcium probes, the BAPTA structure is required as the calcium-binding moiety. 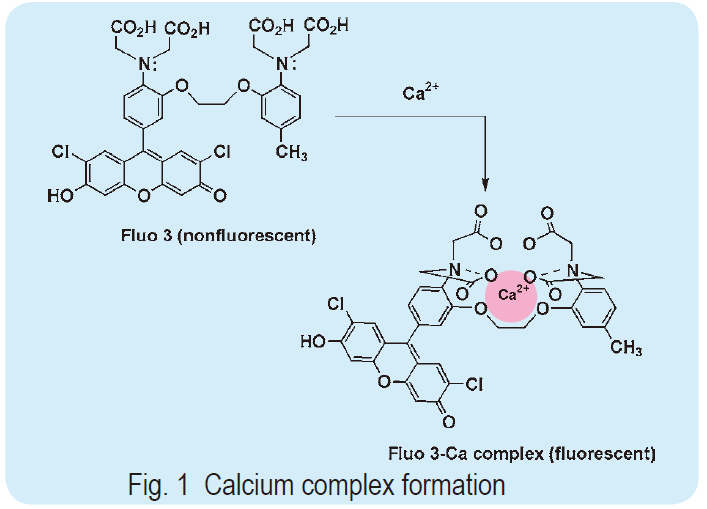 To prepare a calcium probe, which shifts its fluorescent wavelength and changes its fluorescent intensity upon calcium chelation, a suitable fluorescent part must be selected. When the fluorophore is a stilbene type molecule, such as Fura 2 and Indo 1, the lone electron pair on the aromatic nitrogen of the BAPTA structure conjugates the fluorophore. If the calcium ion binds to indicators, donation of the lone electron pair on the aromatic nitrogen to the calcium ion causes a change in the fluorescent signaling. In this case, the calcium concentration may be measured by ratiometry. When xanthene is combined with BAPTA, as with Fluo 3 and Rhod 2, the signal wavelength does not change; however, the signal intensity increases dramatically. This is because the conjugation of the lone electron pair on the BAPTA nitrogen is not involved in the excitation state of xanthene, but rather contributes to the resonance form, which is non-fluorescent. Thus, this type of calcium indicator is practically non-fluorescent. Once the calcium complex is formed, the contribution of the lone electron pair disappears and the original xanthene fluorescent signal is markedly recovered (as shown in Fig. 1). Xanthene has a high quantum yield and long wavelength fluorescence, thus Fluo 3 has an emission and excitation maximum of 528 nm and 490 nm, respectively; for Rhod 2, they are 581 nm and 557 nm, respectively. These excitation wavelengths are convenient when using an argon laser microscope. Therefore, this type of probe is gaining popularity with the progress in laser microscopy, especially confocal laser microscopy.

Zinc is an essential metal ion, and its level is reported to be 28.5 mg per 1 g tissue in humans. However, since most zinc ions are strongly combined with proteins, the concentration of free zinc ions in a cell is at the millimolar level or lower. DNAbinding proteins combine with DNA through several motifs called zinc fingers, zinc twists, ring fingers, or zinc clusters. A shortage of zinc ions influences DNA transcription, and may have some relationship with the development of cancer. Furthermore, zinc ions are thought to have a role in controlling gestation and sexual activity. Zinc ion regulates the activities of several enzymes. Some tissues and organs, such as the brain, spermatazoa, and salivary glands, contain a large amount of zinc ions. Staining of such tissues with TSQ has demonstrated that zinc ions play very important roles in neuronal cell death, endocrine functions, and other physiological phenomena. The role of intracellular zinc ions in apoptosis has also been discussed for several decades. TSQ, Zinquin ethyl ester, and Dansylaminoethylcyclen are useful probes for these studies.

Changes in proton concentration (pH) are often coupled with many cellular events. For example, the Na/H antiporter causes intracellular pH changes. The release of some cellular materials and motility of bacterial flagella are caused by pH fluctuations around the cellular membrane. Monitoring of the intra- or extra-cellular pH is useful in understanding cell signal transduction. If the proton dissociation affects the fluorescent signal of the parent molecule, the molecule can be used to monitor the pH around its pKa value. Thus, to monitor the pH of biological samples, a fluorescent molecule that has a pKa value around 7 is needed. Carboxyfluorescein, with a pKa value of 6.3, is a classical pH indicator for physiological pH fluctuation. However, its pKa value is still a little too low for accurate monitoring of biological pH changes. Carboxyfluorescein also tends to leak from cells. Dojindo offers effective fluorescent pH probes that have good intracellular retention rates and suitable pKa values for this purpose. 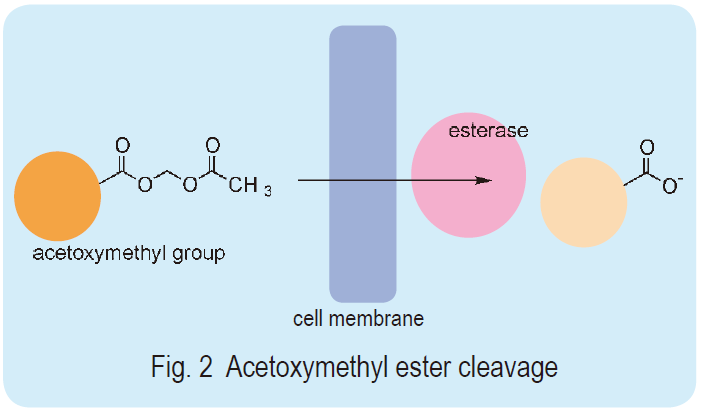 Most intracellular probes have some hydrophilic groups, carboxylates, in their molecules. Their high water solubility does not allow passage through the cell membrane because it is a hydrophobic barrier against the extracellular environment. Dr. Roger Y. Tsien developed acetoxymethyl ester (AM ester) of those probes to deal with this issue. The ester renders the molecules hydrophobic and eases the transfer of the probes into the cell membrane. The AM ester probe is easily and rapidly hydrolyzed into a hydroxymethyl ester by intracellular ubiquitous esterases. The hydroxymethyl ester spontaneously hydrolyzes and produces a parent carboxylate (Fig. 2). Thus, the original ion probe molecules accumulate in the cell simply by incubation with the AM esters since the resulting hydrophilic molecules can no longer pass through the cell membrane. This loading method, called the AM method, is an extremely simple way to load hydrophilic molecules into cells compared to other known loading techniques such as microinjection, osmotic shock, or electroporation. Dojindo offers highly purified AM esters of various intracellular ion probes.

Directions for AM Ester Use

AM ester is usually dispersed in dimethylsulfoxide (DMSO) and diluted with a buffer solution or a culture medium for incubation with living cells. However, because of the high hydrophobicity of AM ester, it is difficult to prepare more than 1 mmol/l aqueous solution, even using DMSO. To prepare a high concentration AM solution, to improve its loading efficiency into living cells, surfactants or BSA are required. Such agents help the AM ester disperse into an aqueous phase. Pluronic F127 or Cremophore EL are suitable for this purpose. Although such surfactants have low cytotoxicity, they should be used at concentrations of 0.2% or less. Sometimes, sonication is necessary to obtain a well-dispersed AM ester solution. The loading of a probe is usually accomplished by 10 to 60 minutes incubation at 37°C in the CO2 incubator. However, in some cases, incubation at a lower temperature may be more desirable to avoid the localization of the probes in cells. Please note that AM ester is sensitive to hydrolysis. Therefore, repeated freezing and thawing of the AM ester stock solution should be avoided because of the risk of humidity absorption by the DMSO solution. One approach to avoid spoiling is to divide 1 to 10 mmol/l of AM ester in DMSO solution into individual use quantities, and keep them frozen. The incubation media should be amine and serum free. Serum contains some esterase activities, and amine tends to accelerate the hydrolysis of AM ester or reacts with AM ester to generate an amide form.

If the excitation or emission maximum of a probe is shifted by the interaction with its target ion, it is possible to estimate near absolute intracellular ion concentration by measuring the ratio of two separate wavelength fluorescence intensities. The measurement can be independent of the sample thickness, concentration of probes loaded, leakage of probes from cells, photobleaching, or other variables. For Fura 2 and Indo 1, ratiometry may be used to measure the calcium concentration changes, while BCECF may be used for pH determination. For Fura 2 and BCECF, the excitation spectra shift. For Indo 1, the emission spectrum changes. If using digital imaging microscopy, it is more convenient to measure the emission wavelength after measuring the excitation wavelength. Fura 2 is thus the most popular calcium probe. If using a flow cytometer, which has a single excitatory light source, Indo 1 is more convenient. It should be noted that if the shape of cells changes during an experiment, ratiometry may not estimate the exact ion concentration.

When a pH indicator is loaded into cells, its pKa value is often changed because of differences in the ionic strengths, viscosities, and other factors. Thus, calibration of the fluorescent signal is needed after the experiment. Take nigericin, for example. Adding this ionophore of monovalent cations (10 mmol/l) and potassium in high concentration (100-150 mmol/l) to the sample keeps the pH value the same as that of the plasma membrane. The extracellular pH is then changed, and the ratio of the two fluorescent signals is measured. Dojindo also offers a probe, BCECF, to monitor the intracellular pH gradient. The probe is useful in monitoring acidic organelles, biogenesis of lysosomes, development of autophagic vacuoles, and so on.

Inositol phosphates and diacylglycerols are generated from phosphatidyl inositols by phospholipase C. They are involved in the movement of cellular calcium ion as second messengers. Inositol 1,4,5-triphosphate is an extremely important messenger that triggers calcium ion release from endoplasmic and sarcoplasmic reticulum. It is thought to increase calcium sensitivity of the inositol-induced calcium release (IICR) channel. Thus, the IICR channel can be opened by a low level calcium ion concentration, causing a dramatic burst of calcium into the cytosol. The released calcium ions and diacylglycerol then activate protein kinase C, a key enzyme of signal transduction. Dojindo’s inositol triphosphate is chemically synthesized, and is fairly stable at room temperature in aqueous solution.