Highly stable molecular layers prepared by the selfassembling method have been used for the development of electrochemical, optical, and various other detection systems. Self-assembled monolayers (SAMs) are crystalline, chemisorbed, organic single layers formed on a solid substrate by the spontaneous organization of molecules. Thiol compounds and gold is a well established combination1). Carboxylic acids, organosilicon derivatives, and diphosphonates on various metal oxide surfaces have also been explored in recent years in an effort to find a good model for such adhesive processes (Fig. 1). SAMs are easily modified at the single molecular and assembled levels. They are very useful research models to promote our understanding of the self organization mechanism of molecules, molecular structure and property relationships, and phenomena at the interface between different phases. The high flexibility of SAMs has allowed us to study the electron transfer mechanism of proteins, molecular layers, and biosensors. 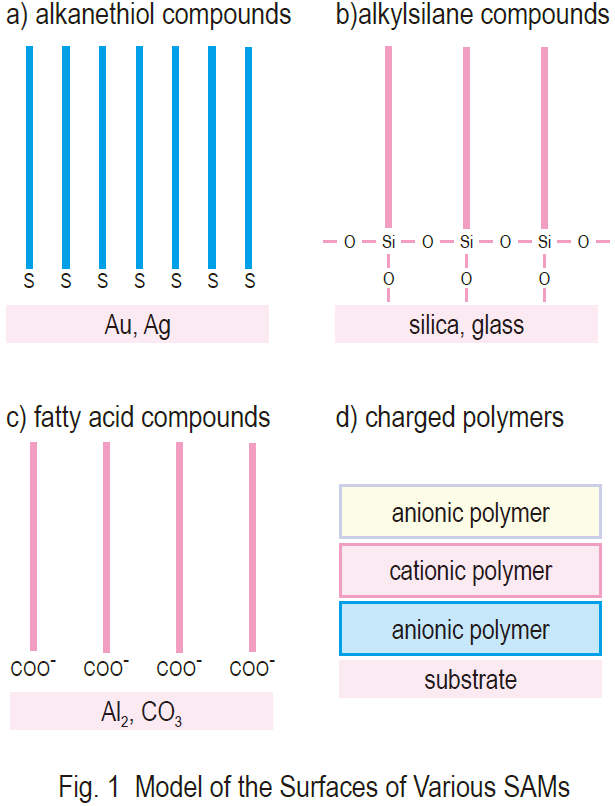 self-assembling process of alkanethiols on gold is initiated by the strong chemical interactions between the sulfur and gold surface. This interaction is a result of chemisorption that forces the thiolate molecule to adsorb to a gold lattice. The tail-to-tail interactions of the alkanethiolate molecules (created by lateral, interchain, nonbonded interactions, such as van der Waals, steric, repulsive, and electrostatic forces), are strong enough that the molecules align parallel on the gold surface and create a crystalline film.1,2) (Fig. 2). Therefore, the packing and ordering of molecules is controlled by a chemisorption mechanism.3,4) In practice, the solid surface is simply dipped into a solution containing adsorbing molecules. Organic disulfides, thiols, and sulfides are widely used for the preparation of stable SAMs on gold surfaces. The selfassembling process and the orientation of the molecular layer on a gold surface have been investigated thoroughly using Fourier transform infrared spectroscopy (FT-IR),5,6) scanning tunneling microscopy (STM),1) atomic force microscopy (AFM),7) X-ray photoelectron spectroscopy (XPS),8,9) electrochemistry, 4,10) Raman spectroscopy,11) Ellipsometry,12,13) and quartz crystal microbalance (QCM).14,15) Please refer to the papers by Dr. Ulman for extensive reviews about the selfassembly process.3),4) 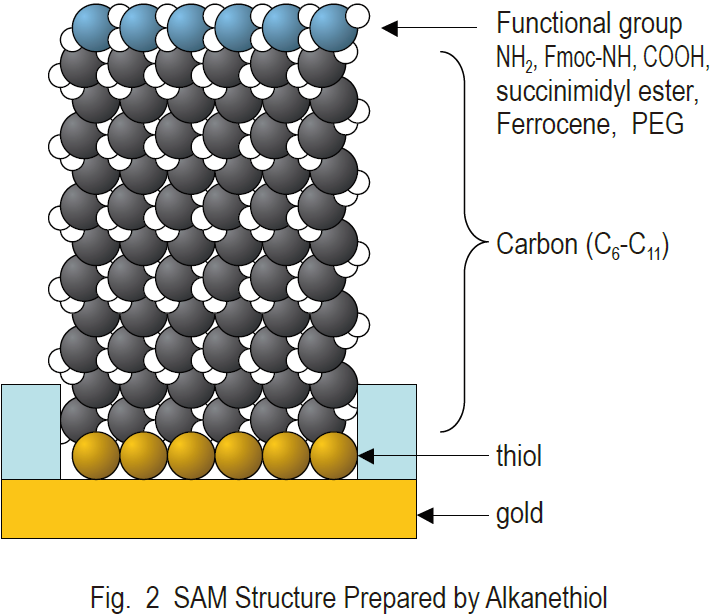 A common application of SAMs is in the creation of sensors with molecular recognition properties. Many groups have studied the electrochemical characteristics of alkylthiols for ion detection and molecular recognition. For example, Turyan and others used SAMs composed of ω-mercapto-carboxylic acids on mercury film and gold electrodes for very sensitive and selective analyses of cadmium(II).16) Taniguchi and others created a membrane model with molecular gating by incorporating Meldola’s Blue into self-assembled decanethiol monolayer-coated electrodes.17) Katayama and Maeda reported the electrochemical detection of cyclic AMP by a 17-mer oligopeptide-coated gold electrode. They showed that this response was dependent on the cyclic AMP concentration, but not ATP, using cyclic voltammograms of ferrocyanide/ ferricyanide redox coupled with the electrode.18) Wang and others reviewed the behavior, utility, and advantages of an amperometric flow detector coated with unsubstituted n-alkylthiols. They indicated that a hydrophilic alkylthiol monolayer has a high selectivity toward lipophilic drugs such as chloropromazine and dipamine.19)

The use of a short peptide as an affinity tag is one of the most common methods for the detection and purification of recombinant proteins. These tag proteins are mostly antibody epitopes that are detected with their antibodies.20) Sigal and others prepared a self-assembled monolayer that selectively binds protein with a stretch of six histidines (His-tag). They prepared two alkanethiols, one with a nitrilotriacetic acid (NTA) group that forms a tetravalent chelate with Ni(II) ion and the other with a triethyleneglycol group that is capable of avoiding nonspecific adsorption of protein (Fig. 3). This membrane can only recognize a His-tag protein through the nickel(II) ion chelated with NTA on the SAM. This technique is useful for immobilization of His-tag proteins for study using surface plasmon resonance (SPR).21) 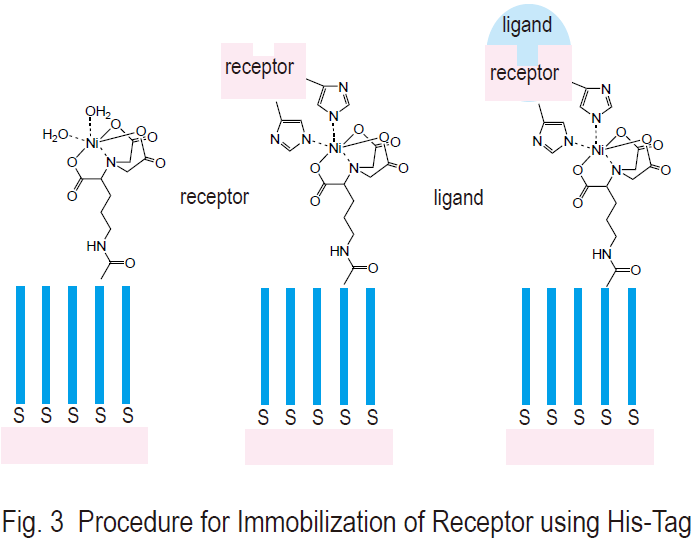 Surface Plasmon Resonance Studies for Interactions of SAMs and Proteins

Surface plasmon resonance (SPR) is commonly used to measure the kinetics of association and dissociation of ligands and proteins in aqueous solution. It is particularly powerful for the observation of processes occurring at or near interfaces. The sensing element is a thin (40-50 nm) gold or silver film deposited on a glass surface. The back of the gold-coated glass slide is irradiated with p-polarized light, with the reflection angles controlled to minimize the intensity of the reflection. Since the value of this reflection angle linearly depends on the amount of protein adsorbed on the surface, the protein can be monitored by SPR (Fig. 4).20-22) 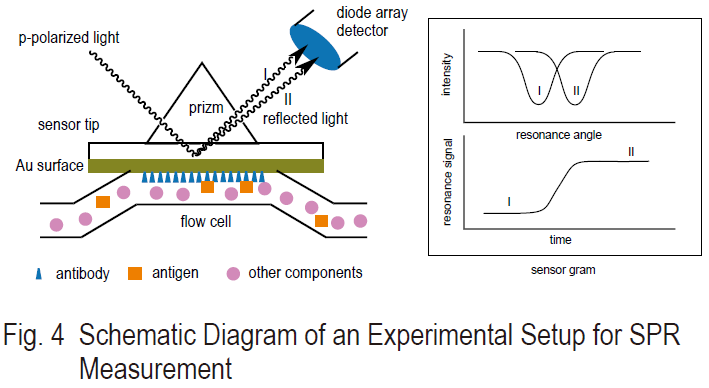 Mrksich and others studied the thermodynamic and kinetic mechanism between benzenesulfonamide-attached SAM and bovine carbonic anhydrase (EC 4.2.1.1) using the SPR technique.22,23) Ringsdorf and others prepared protein triple layers on biotin-attached SAMs on gold surface using streptavidin and anti-chorionic gonadotropin-Fab (anti-hCGFab) fragments (Fig. 5). They investigated the hinge, or linkage region, of the Fab fragment; the second layer formation (streptavidin, Fab fragment); the third layer formation by antigen hCG; and quantification of these processes. SPR coupled with SAM is an excellent method for determining surface phenomena. The SPR method has been used for the determination of epitopes of monoclonal antibodies, development of immuno-detection systems, research on signal transfer mechanisms, and other studies.

Protein-coated electrodes provide suitable systems for the development of devices using protein layer interfaces.24) Cytochrome c, ferredoxin, and myoglobin are particularly interesting proteins for interfacial electrochemical studies. For example, Niki’s group has been studying diffusionless standard electron transfer rate constants of cytochrome c immobilized on a carboxylic acid-attached SAM with an electroreflectance spectroscope.25) Several researchers have used electrochemical techniques for characterizing the absorption of poly(L-lysine)-coated SAMs. Poly(L-lysine) was fixed to carboxylic acid-attached SAMs through an electrostatic binding between a negative charge of carboxylate and a positive charge of amine residue. The poly(L-lysine)-coated SAMs were used to develop a detection system for glucose and for research on the electron transfer mechanism of cytochrome c.24),26),27),28) Nakashima’s group prepared polyethyleneglycolattached SAMs and reported that a supramolecular structure was formed by the interaction between poly(ethyleneglycol) and acyclodextrin.29) 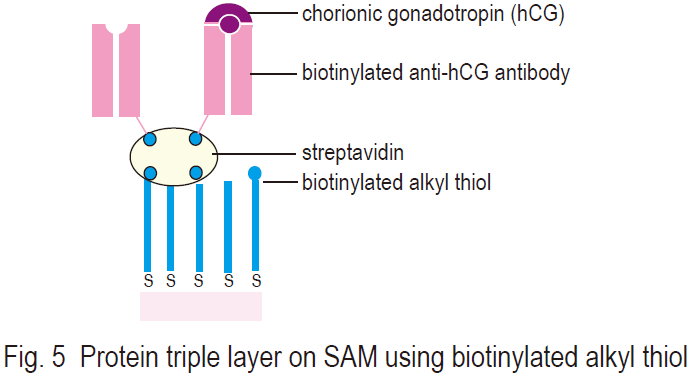 Electrochemical DNA sensors may be useful devices for the sequence-specific detection and quantification of DNA or RNA in solutions. The amount of DNA or RNA in solution can be measured as an amperometric or voltammetric signal.24) Katayama and others prepared a calf thymus DNA-coated gold electrode to detect anti-DNA antibody. They demonstrated that this system could be useful for the development of biosensors for DNA-binding proteins.30) Okahata’s group used frequency changes in quartz crystal microbalance (QCM) to detect oneto- one hybridization between oligonucleotides immobilized on gold electrodes of the QCM and target M13 phage DNA in aqueous solution. They prepared a 10-mer deoxynucleotide with a mercaptopropyl group at the 5’-phosphate end whose sequence was complementary with the EcoR1 binding site of single-stranded M13 phage DNA.31,32) The QCM method is very sensitive because its resonance frequency decreases upon the increase of the mass on the QCM. The QCM method is useful for the study of molecular kinetics of base-pair hybridization in oligonucleotides and to detect various biological materials. 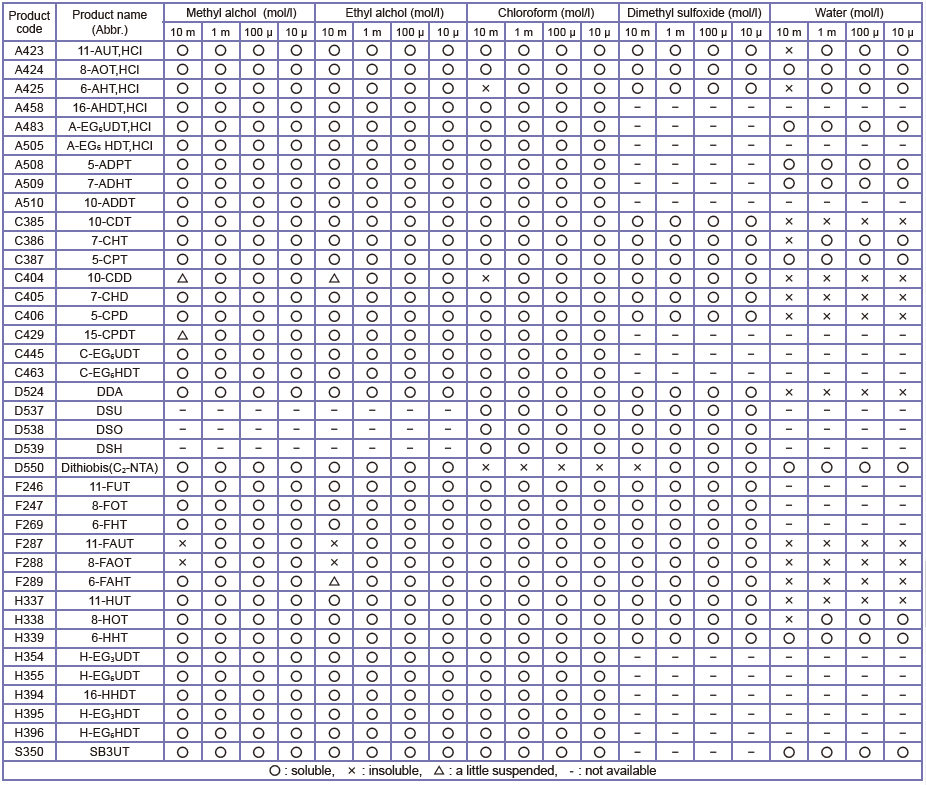