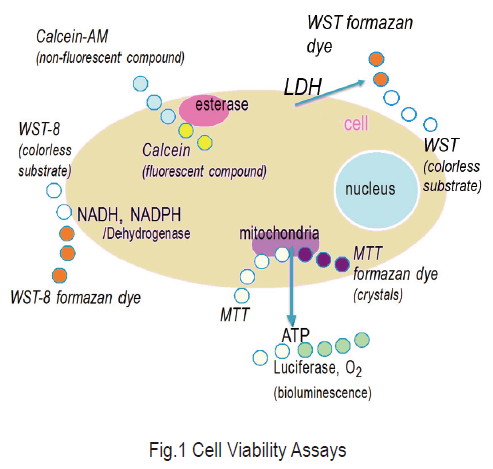 Cell viability and cytotoxicity assays are used for drug screening and cytotoxicity tests of chemicals. They are based on various cell functions such as enzyme activity, cell membrane permeability, cell adherence, ATP production, co-enzyme production, and nucleotide uptake activity. A widely used assay for staining dead cells is Trypan Blue. In this method, cell viability must be determined by counting the unstained cells with a microscope or other instruments.
However, Trypan Blue staining cannot be used to distinguish between healthy cells and cells that are alive but losing cell functions. Because of this, enzyme-based methods have been gaining more attention. Fig. 1 indicates various reagents used for detection of cell viability.
Among the enzyme-based assays, the MTT assay is the best known for determining mitochondrial dehydrogenase activities in living cells. MTT is reduced to a purple formazan by NADH. MTT formazan, however, has low solubility in water and it forms purple needle-shaped crystals in cells. Before measuring absorbance, an organic solvent is required to dissolve the crystals. Additionally, the cytotoxicity of MTT formazan makes it difficult to remove cell culture media from the plate wells due to many floating cells with MTT formazan needles, giving significant well-to-well error.

Although the 3[H]thymidine-uptake assay is regarded as a reliable cell viability assay, the use of a radioisotope causes various concerns. The 51Cr method is highly sensitive and is commonly used to determine low levels of cytotoxicity.
However, the use of 51Cr also causes problems in handling, storage, and disposal of the material. Cellular enzymes such as lactate dehydrogenase (LDH), adenylate kinase, and glucose-6-phosphate dehydrogenase are also used as cell death markers, and there are several such products available on the market. However, adenylate kinase and glucose-6-phosphate are not stable; only lactate dehydrogenase does not lose its activity during cell death assays. Therefore, cell death assays based on LDH activity are more reliable than other enzyme-based cell death assays.

Dojindo developed highly water-soluble tetrazolium salts called WSTs. WSTs produce water-soluble formazans and are suitable for assays of cell proliferation and cytotoxicity. WSTs receive two electrons from viable cells to generate a yellow, orange, or purple formazan dye. WST-8, a highly stable WST, is utilized in Cell Counting Kit-8 (CCK-8). The electron mediator used in this kit, 1-Methoxy PMS, is also highly stable. Therefore, CCK-8 is stable for at least 6 months at room temperature and one year at 0-5°C. Since WST-8, WST-8 formazan, and 1-Methoxy PMS have no cytotoxicity in cell culture media, additional experiments may be carried out using the same assay plate. Dehydrogenase-based assays reflect cell conditions with more sensitivity than the other assays because they depend on several elements including dehydrogenases, NAD(H), NADP(H), and mitochondrial activity. The major difference between CCK-8 and the MTT assay, other than MTT’s toxicity, is the enzymes involved.

The CCK-8 assay involves most of the dehydrogenase in a cell, while MTT only involves mitochondrial dehydrogenase. Therefore, the MTT assay depends on mitochondrial activity, not the cell itself. Additionally, CCK-8 is far more sensitive than the MTT assay. Since WST-8 formazan is water soluble, it does not form crystals as MTT does. Therefore, after 1-4 hours of incubation with the CCK-8 solution, measurement of O.D. at 450 nm gives the number of viable cells. No extra steps are required.

Esterase Activity Based Assay: Cell Counting Kit-F
Cell Counting Kit-F is another cell viability assay kit based on the esterase activity of viable cells. Fluorescent esterase substrates, such as Calcein-AM, BCECF-AM, CFSE, and FDA, can be passively loaded into viable cells. These electrically neutral molecules, which have acetyl or acetoxymethyl groups capping the phenolic OH or carboxylic groups of Calcein, freely permeate into the cell. Intracellular esterases then convert them into green fluorescent products, which are retained by cells. These esterase substrates, therefore, can serve as viability assay probes for cells. Calcein-AM is used for the kit because it is retained inside of cells better than the other fluorescent esterase substrates.